"Torsen" is short for "Torque-Sensing" and "LSD" stands for "Limited Slip Differential." The point of an LSD is to provide power to TWO wheels instead of one, for better traction. The torque-sensing feature is intended to sense when one side is spinning faster than another, and direct more energy to the side with better traction, to keep the vehicle moving.

Additional Parts Needed if doing your own machining

Most Torsen LSD's still divide power between both sides. For example, say you have one wheel on pavement and another on dirt, it will send 75% of the torque to the side on pavement, and 25% to the side on dirt. This is okay, because the side that's on dirt will eventually catch up, and it will be 50/50 again. But what happens if one powered wheel has no traction is off the ground? For example, this may happen in a track car with super-stiff suspension, as it rounds a corner at high speed.

That 25% of the power is being wasted. This is what Wavetrac decided to address, by creating a sliding/rotating mechanism to uncouple the axle that is off the ground and send FULL power to the side that's still in contact with the earth. And all this can happen in a split second, and then it's right back to being divided 50/50 between the axles.
On a race car, this can mean the difference between losing power and getting passed, or holding your position. On a passenger car, this could be what keeps you in control when you hit a sheet of ice in the winter and the car starts to spin out (it acts the same way when one tire is on ice as it does if that tire was off the ground.) On an off-road vehicle, it could be what gets you over that big rock when you reach the limit of you suspension articulation.
Included with our installation kit: 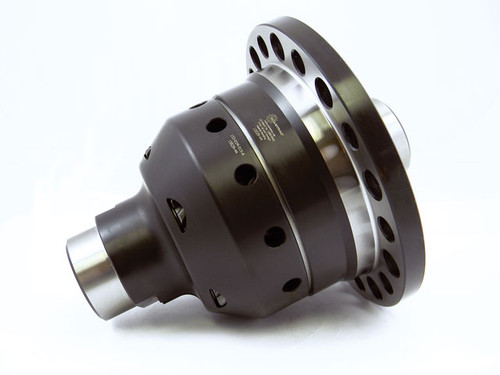